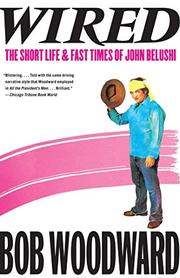 "Don't give him fucking coke!" So screams John Belushi's wife Judy on the first page of this enervating, pointless docu-drama. And that's how it goes for over 400 pages: working from interviews with 267 people, Woodward offers—without shape, depth, or viewpoint—the dankly depressing, morbidly detailed life of John Belushi, comic actor and (above all) epic drug-user. After a disproportionately brief chapter on his early background, campus cut-up Belushi is suddenly in 1971 Chicago with the Second City comedy troupe; he and girlfriend Judy are into drugs; by page 58 he's in N.Y., in the comedy-revue hit Lemmings. ("He was the star of the show for sure, indelibly certified in the newspaper of record, the New York-fucking-Times.") And then it's on to Saturday Night Live in the mid-1970s, as the pace slows to a crawl in order to document each drug-deal, each snort, each backstage wrangle. Envious of Chevy Chase, "driven to become famous," Belushi became increasingly dependent on cocaine and Quaaludes; while Judy and others cut back on their drug habits, his escalated. Despite the loyalty of Judy (Woodward's primary source) and pal Dan Aykroyd, Belushi was insecure; there were love/hate relationships with his drug-connections, odd liaisons with Barbara Howar (maternal, platonic) and Carly Simon. (She "still loved John. His crazy, impulsive boldness broke down her acute shyness. And they were both reaching for more in their art.") The making of his feature films was to become a nightmare for all concerned—including the benumbed reader: the bomb Neighbors is followed from conception to distribution here, with minutiae and anecdotes, as if it were Gone With the Wind. And eventually, out in L.A., working on problematic movie-projects, Belushi added heroin to his fix, with the well-known fatal results. Woodward adds little to the record when it comes to Belushi's not-very-mysterious death; throughout, in fact, his investigative-journalist approach falls flat—there being nothing much worth investigating. Above all, Woodward seems to have no idea of what's involved in turning bare facts (or reconstructed dialogue) into a satisfying biography. So the result here, though scrupulously documented, is a dreary, empty chronicle, with enough real substance, perhaps, for a New York magazine article; and its audience will be limited to SNL buffs (skit transcripts, backstage tattle) and those with a passionate interest in the drug-habits of such celebs as Chevy Chase, Robin Williams, Treat Williams, Tony Curtis, Carrie Fisher, and Betty Buckley.