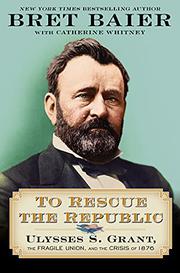 TO RESCUE THE REPUBLIC

Ulysses S. Grant, the Fragile Union, and the Crisis of 1876

by Bret Baier with Catherine Whitney

The latest book of pop history from the chief political anchor for Fox News.

The Jan. 6, 2021, insurrection at the U.S. Capitol, which Baier witnessed in his capacity as a political reporter and anchor, gave new meaning to the turmoil surrounding the 1876 presidential election. In this conventional biography of Ulysses S. Grant (1822-1885) designed for general readers who have not studied the era, the election occupies only 50 pages near the end. A mediocre West Point cadet, Grant achieved little glory in the Mexican-American War, resigned his commission, and struggled to earn a living. The beginning of the Civil War found him clerking in a leather goods shop and farming. The only West Point graduate in the area, he was chosen to lead local units; after six months of intense activity against minor Confederate posts and lobbying by his congressman, a friend of Lincoln, Grant became a general. He turned out to be the most aggressive and imaginative Union commander. A national idol after Appomattox in 1865, he easily won presidential elections in 1868 and 1872. Recent historians have upgraded his performance in office, but Baier holds the traditional view that Grant was an honorable man but a poor politician surrounded by scoundrels. Scandals occurred regularly, and his final months in office were preoccupied by the mess following the 1876 election, which saw a closely contested battle that the Republican candidate, Rutherford B. Hayes, barely won. As in his previous books on FDR, Eisenhower, and Reagan, Baier relies heavily on other biographies, including Ron Chernow’s superior Grant (2017), and Grant’s own memoirs, a straightforward and plainspoken history. Throughout, the author can’t resist the use of invented dialogue and conjectures of historical figures’ inner thoughts, but he gets the facts right.

Better Grant biographies are not in short supply; readers should seek them out instead of this one.