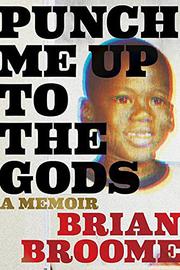 PUNCH ME UP TO THE GODS

An engrossing memoir about growing up Black and gay and finding a place in the world.

Structured around Gwendolyn Brooks’ poem “We Real Cool,” Broome’s thought-provoking, emotional journey unfolds through a clever use of parallel stories and juxtaposition. Writing about an experience at a bus stop on “the Black end of town,” where he watched a father berate his toddler son for crying, the author addresses his own upbringing with an abusive father whose “beatings were like lightning strikes. Powerful, fast, and unpredictable. He held his anger so tightly that, when it finally overtook him, the force was bone-shaking. He punched me like I was a grown-ass man.” As a dark-skinned Black boy in Ohio, Broome’s childhood was fraught with peril; at school, it was made abundantly clear that God “made white people and Black people and meant for us to stick to our own kind.” His parents used shame and abuse to try and toughen him up, tactics the author describes in heart-wrenching detail. While watching the man on the bus, he realized that “what I am witnessing, is the playing out of one of the very conditions that have dogged my entire existence. This 'being a man' to the exclusion of all other things.” Moving back and forth through time, Broome revisits similar scenes—e.g., punishment and rejection for not acting according to someone’s expectations, halting attempts to express himself—and he interrogates his complicated relationship with his parents. In one particularly poignant passage, the author describes how he convinced his mother to buy him a girl’s shirt at the store: “And from that day to this one, no one has ever looked at me like my mother did that day. It was pity mixed with worry for what was to come. It was the piping pink manifestation of all she had ever suspected.” Beautifully written, this examination of what it means to be Black and gay in America is a must-read.