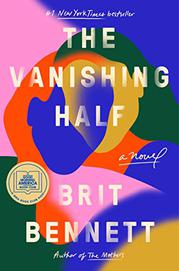 Inseparable identical twin sisters ditch home together, and then one decides to vanish.

The talented Bennett fuels her fiction with secrets—first in her lauded debut, The Mothers (2016), and now in the assured and magnetic story of the Vignes sisters, light-skinned women parked on opposite sides of the color line. Desiree, the “fidgety twin,” and Stella, “a smart, careful girl,” make their break from stultifying rural Mallard, Louisiana, becoming 16-year-old runaways in 1954 New Orleans. The novel opens 14 years later as Desiree, fleeing a violent marriage in D.C., returns home with a different relative: her 8-year-old daughter, Jude. The gossips are agog: “In Mallard, nobody married dark....Marrying a dark man and dragging his blueblack child all over town was one step too far.” Desiree's decision seals Jude’s misery in this “colorstruck” place and propels a new generation of flight: Jude escapes on a track scholarship to UCLA. Tending bar as a side job in Beverly Hills, she catches a glimpse of her mother’s doppelgänger. Stella, ensconced in White society, is shedding her fur coat. Jude, so Black that strangers routinely stare, is unrecognizable to her aunt. All this is expertly paced, unfurling before the book is half finished; a reader can guess what is coming. Bennett is deeply engaged in the unknowability of other people and the scourge of colorism. The scene in which Stella adopts her White persona is a tour de force of doubling and confusion. It calls up Toni Morrison’s The Bluest Eye, the book's 50-year-old antecedent. Bennett's novel plays with its characters' nagging feelings of being incomplete—for the twins without each other; for Jude’s boyfriend, Reese, who is trans and seeks surgery; for their friend Barry, who performs in drag as Bianca. Bennett keeps all these plot threads thrumming and her social commentary crisp. In the second half, Jude spars with her cousin Kennedy, Stella's daughter, a spoiled actress.

Kin “[find] each other’s lives inscrutable” in this rich, sharp story about the way identity is formed.