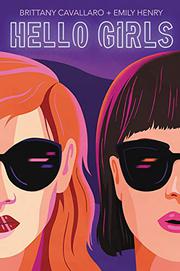 Two high school seniors escape their hostile homes in a stolen car, headed from the Upper Peninsula of Michigan to Las Vegas on a crime spree that turns more dangerous as they rack up the miles.

Winona Olsen is a rich girl whose mother is dead and whose father, Stormy, a beloved local meteorologist, secretly and regularly abuses her. Lucille Pryce lives in poverty with her struggling single mother and threatening, drug-dealing older brother, Marcus. The girls first meet one night outside the police station, bruised and hurt. Instead of reporting the familial crimes, they go to a bar and begin a friendship. It proves a lifeline when soon they are running for their lives: Winona from her father’s rage when she uncovers proof of a lie he has told and Lucille from Marcus after she steals his stash to stop him dealing. As they drive off together, they reflect upon the ways in which their lives have been scripted by men—and experiment with taking their power back. The girls’ voices are authentic, and readers will enjoy a feeling of female empowerment as they follow them on their road trip (Lucille turns out to be an accomplished card counter and Winona is a pool whiz). The book follows a white default.