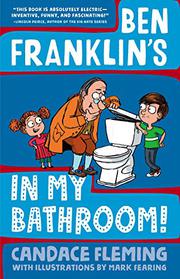 BEN FRANKLIN'S IN MY BATHROOM!

Antics both instructive and embarrassing ensue after a mysterious package left on their doorstep brings a Founding Father into the lives of two modern children.

Summoned somehow by what looks for all the world like an old-time crystal radio set, Ben Franklin turns out to be an amiable sort. He is immediately taken in hand by 7-year-old Olive for a tour of modern wonders—early versions of which many, from electrical appliances in the kitchen to the Illinois town’s public library and fire department, he justly lays claim to inventing. Meanwhile big brother Nolan, 10, tags along, frantic to return him to his own era before either their divorced mom or snoopy classmate Tommy Tuttle sees him. Fleming, author of Ben Franklin’s Almanac (2003) (and also, not uncoincidentally considering the final scene of this outing, Our Eleanor, 2005), mixes history with humor as the great man dispenses aphorisms and reminiscences through diverse misadventures, all of which end well, before vanishing at last. Following a closing, sequel-cueing kicker (see above) she then separates facts from fancies in closing notes, with print and online leads to more of the former. To go with spot illustrations of the evidently all-white cast throughout the narrative, Fearing incorporates change-of-pace sets of sequential panels for Franklin’s biographical and scientific anecdotes. Final illustrations not seen.

It’s not the first time old Ben has paid our times a call, but it’s funny and free-spirited, with an informational load that adds flavor without weight.