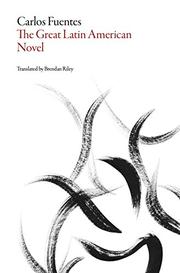 The late, great Mexican novelist and critic (1928-2012) offers a personal history of the fiction he admired.

Fuentes (Destiny and Desire, 2011, etc.) has few harsh words for anyone in this history (though he calls some work by Ken Follett “startlingly bad”), which commences in the 16th century with Bernal Díaz del Castillo’s True History of the Conquest of New Spain, a work that Fuentes identifies as the first novel of Latin America. Early on, the author begins referring to some literary lions who roared elsewhere, writers to whom he returns throughout this richly detailed and idiosyncratic work—among them, Cervantes, Proust, and Faulkner. In many ways a scholarly work as well, the text alludes to Max Weber, Erasmus, Rousseau, and other intellectual notables. Fuentes writes frequently about the novelists’ use of time, place, and, most of all, language. The organization is chronological at first and later, geographical, as he looks at the novels of writers from Chile, Brazil, Nicaragua, Peru, and elsewhere. (He admits a sort of “Mexican bias,” but he also spends a lot of time with Argentinian writers.) Fuentes is also aware of a male dominance and makes a serious effort, especially in the final quarter of the book, to highlight novels by women. Effusive praise appears often, and he features such locutions as, “his prose is as bright and clear as day,” and “a brilliant, richly textured book.” A subtitle for this book could be Novels I Have Loved. Fuentes occasionally offers declarations about the novel (“There can be no literature without the body”) and also provides, in instructional fashion, lists of writers and works and commonalities among them. In moments that have enormous contemporary resonance, he argues powerfully for the great advantages of immigration.

A valedictory work full of erudition and heart.