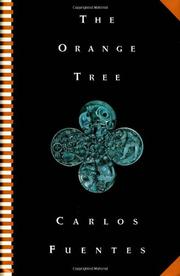 Fuentes continues to interpret the clash between the Old and New Worlds with dazzling imaginative insight in five novellas that span a spectrum of eras and individuals. Each story features an orange tree, the symbolic presence of Spain, brought by the Moors to Spain and then later carried by the Conquistadors to Mexico. "Could any image verify a Spaniard's identity better than the sight of a man eating an orange?" asks the dead narrator of the first novella, The Two Shores, which is as much an investigation of the power of language as an interpretation of the Spanish conquest. In it the dead man recalls how, after being shipwrecked, he had lived among the natives, learned their language, and planted an orange tree. He is found by Cortes, who employs him as a translator until he is supplanted by Cortes' mistress, a Mayan. In The Sons of the Conquistadors, two heirs of Cortes dispute the interpretation of their father's will, which they regard as promising redress to the Mayans. "I'm sick of the spectacle of death...I don't understand how a nation is born," observes the one exiled to Spain. The Two Numantias is on one level a history of the Roman conquest of Spain, on another a meditation on the power of language, which "constructs the work of art." In Apollo and the Whores, an aging Hollywood actor, the only American to win an Oscar for a role in a foreign film, comes to Acapulco, and on a macabre ship of whores, finds in death his greatest role. The fifth novella, The Two Americas, is a satirical reworking of Columbus' search for the Indies, but here he finds paradise and never leaves until forced out by entrepreneurs of the future seeking a pristine spot in a polluted world. Exuberantly imaginative and unabashedly sensual, Fuentes, even when the conceits seem strained, never fails to entertain, instruct — and, yes, provoke.