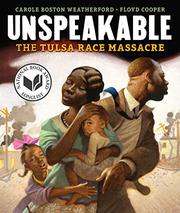 A once-thriving Black community was destroyed, and the story of how it happened went untold for decades.

In the beginning of the 20th century, Tulsa, Oklahoma, was emerging as a thriving oil town, and African Americans worked to establish communities in the face of discrimination. The separate neighborhoods that grew out of segregation meant that Black businesses sprang up to serve those who could not frequent White establishments. The African American neighborhood of Greenwood had so many it became known as “Black Wall Street,” with an impressive range of services and opportunities. The tenuous nature of Black prosperity was reinforced, however, when a White woman accused a Black man of assault. White mobs, unable to reach the suspect, descended on Greenwood, looting the businesses and burning the community to the ground. With no protection or assistance from law enforcement, all that the residents had achieved was lost. Further, it took 75 years before an official investigation was launched. Author Weatherford and illustrator Cooper join forces to present this important story with sensitivity and care for younger readers. Weatherford’s measured prose depicts the events in a cleareyed, age-appropriate narrative. Oklahoma native Cooper’s muted palette and oil-erasure style effectively portray first the achievement and then the devastation that followed. The author’s and illustrator’s notes provide valuable insight and context, as does the rear endpapers’ photograph of the massacre’s aftermath.

A somber, well-executed addition to the history as the incident approaches its 100th anniversary.