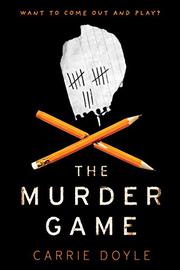 A murder in a boarding school leads a teen sleuth down a dangerous path.

When Luke and his roommate, Oscar, snuck out of their dorm room after hours to hook up with two girls in the woods, they did not expect to get involved in a murder. Dean Heckler’s young wife’s body is found the morning after, near the place the teens were hanging out. Fear of being expelled prevents them from confessing their presence around the time of the murder—but when Oscar becomes a suspect, Luke starts his own investigation to prove his best friend’s innocence. Fortunately, three years earlier Luke had escaped a kidnapping using survival skills learned from his former–POW grandfather, the same skills he now needs if he wants to find the true murderer and get out of this situation alive. This whodunit has enough twists and red herrings to make for an intriguing mystery if readers are prepared to suspend disbelief at how frequently adult characters act with implausible negligence. The book is also weighed down by a haze of misogyny when describing both girls at the school as well as the murdered woman, who remains a vapid, one-note seductress throughout. Luke’s vague and perfunctory attempts at challenging his male friends in their sexist views are not enough to clear the chauvinist miasma. Main characters are White.