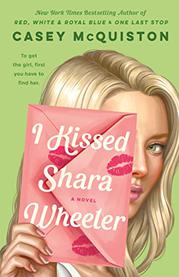 A romance with solid queer representation set against the backdrop of an Alabama Christian school.

Chloe Green is the only one who sees through Shara Wheeler’s goody-two-shoes act, and now that Shara’s pulled a disappearing act right before being crowned prom queen, she makes it her business to find her. This means teaming up with unlikely allies like Smith Parker, Shara’s jock boyfriend, and Rory Heron, the brooding boy next door, both in love with Shara, just as Chloe claims she is not. What brings the trio together is a series of notes Shara has left them, along with the awkward fact that she kissed all three of them before vanishing. McQuiston’s YA debut starts off as a fun page-turner with a rich cast of queer characters but ultimately disappoints with its predictable plot twists and protagonists whose journeys feel lackluster. In a story that uplifts the importance of friendship and found family, the main character’s tunnel vision and indifference toward her friends’ problems make for an ending that doesn’t feel earned. Rather than coming across as a complicated but earnest love interest, Shara feels superficial and narcissistic, raising the question of why so many people drop everything to pursue her. Shara and Chloe are White; Rory has a White mom and Black dad, and Smith is described as having dark brown skin. Bisexual Chloe has two moms.

An engaging, fast-paced story let down by character development.