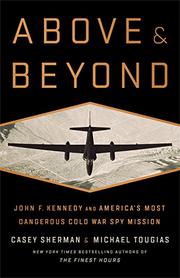 For 13 days in October 1962, during the hottest part of the Cold War, the fate of humanity was at stake.

During those two weeks, American U-2 spy planes flying above Cuba had discovered Soviet missile sites in an advanced stage of assembly. In this new history of the Cuban missile crisis, Sherman and Tougias (co-authors: The Finest Hours: The True Story of the Coast Guard's Most Daring Sea Rescue, 2009) sketch the swift development of the elegant U-2 commissioned by the CIA and highlight the signal courage and capability of its dedicated pilots. At the time, surveillance data showed that in less than two weeks, the Soviet nuclear missiles would be fully operational. President John F. Kennedy, keenly familiar with danger and death due to his service in World War II, prepared for World War III, ready to engage the Soviets in the Caribbean and destroy hundreds of targets in the Soviet Union. He assembled an advisory group that included, among many other significant figures, Allen Dulles, Robert McNamara, McGeorge Bundy, Bobby Kennedy, and Curtis LeMay. There were also functionaries on both sides who might trigger war inadvertently or, if they were short-tempered, even deliberately. The authors have assembled a page-turning narrative of their deliberations using extracts from White House tapes as well as archival research and conversations with some of those involved. At the Kremlin, Nikita Khrushchev was troubled and inscrutable, while Kennedy was deliberative. Opting for a naval blockade, he kept all forces at full readiness. Only at the last hours did diplomacy prevail. Kennedy was able to recall the ships, the Army, the Marines on standby, and the bombers bearing nuclear weapons. Thinking of what a lesser commander in chief might have done, readers will shudder.

An edifying history that, given America’s current global diplomatic stance, is also timely and hopefully instructive to those faced with similarly dire circumstances.