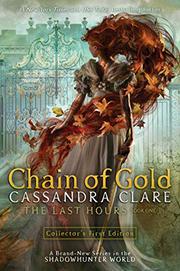 From the Last Hours series, volume 1

Clare’s (Ghosts of the Shadow Market, 2019, etc.) latest is set in the Shadowhunter world in the 20th century’s first decade (with frequent flashbacks to the previous one).

Teenage offspring of the Herondales, Carstairs, Fairchilds, and other angel-descended Nephilim continue their families’ demon-fighting ways amid a round of elegant London balls, soirees, salons, picnics, and romantic intrigues. James Herondale, 17-year-old son of Will and Tessa, finds himself and his “perfectly lethal dimple” hung up between two stunning new arrivals: Cordelia Carstairs, red-haired Persian/British wielder of a fabled magic sword, and Grace Blackthorn, an emotionally damaged but (literally, as the author unsubtly telegraphs) spellbinding friend from childhood. Meanwhile, a sudden outbreak of demonic attacks that leave more and more Shadowhunters felled by a mysterious slow poison plunges James and a cohort of allies into frantic searches for both a cause and an antidote. Ichor-splashed encounters with ravening boojums and even one of hell’s own princes ensue—all leading to final hints of a devastating scheme to destroy the Nephilim in which James himself is slated to play a central role. Characters have a range of skin tones, but ethnic diversity adds no texture to the portrayals; there is a lesbian cousin who wears traditionally male clothing and two young gay men (one tortured, the other less so).