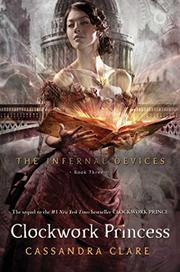 From the Infernal Devices series, volume 3

Politics, clockworks and epic angst complete this slow but satisfying finale to The Infernal Devices trilogy.

Tessa is in love with both her fiance, Jem, and his parabatai—shield brother—Will. As this Victorian trilogy draws to a close, there’s politics and plotting aplenty, but the trio, each member of which adores the other two wholeheartedly, is preoccupied with its own schmaltzy romance. (Will’s Byronic, self-loathing man-pain is palpable enough to practically be a character in its own right.) Despite the florid drama of their triangle, they successfully fight both internal Shadowhunter politics and the moustache-twirling villain Mortmain. Chapter epigraphs from Poe, Milton, Saint Augustine and more introduce grandiloquent prose peppered with Latin, Welsh and Mandarin, sometimes untranslated, but there’s plenty of substance mixed in with the bombast. The trio’s voices often make way for those of the found family comprising the Shadowhunters of the London Institute: the shamed and love-struck Lightwood brothers, Will’s determined sister Cecily, maternal Charlotte, warlike former victim Sophie. This loving if dysfunctional collective comes together for Clare’s trademark climactic battle, cinematic as always. Clare loyalists will be pleased by connections to the contemporary Mortal Instruments series.