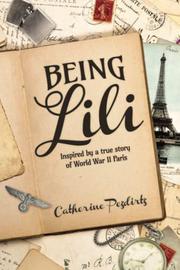 Inspired by a True Story of World War II Paris

A young American woman gets recruited to spy on the Nazis in occupied Paris during World War II in this historical novel.

After her love, James Billings, is killed in the war, Lillian Jackson is spurred by rage to join the fight and enlists in the Women’s Army Corps. She finds herself in London and is offered a remarkable mission: parachute into Paris and pose as a Frenchwoman from Toulon—she speaks perfectly fluent French—and land a job as a clerk in one of the Nazi offices. She finds one at the German Military Command’s office in the Hotel Majestic, and, equipped with a lighter that is a clandestine camera, she keeps an eye open for any information that will aid the Allies. Her mission is as dangerous as it is difficult—she is now Lili Villon and must pretend to be a native of a country she has never visited, unable to trust anyone. As the Resistance scores more victories and the Germans lose ground in the war, the Nazis hunt ever more hungrily for spies out of a desperation Lili notices: “Their confidence melts a little more each day. From all the shouting and swearing, I can tell their nerves are raw.” Pezdirtz faithfully captures the demoralization of Paris under harsh Nazi rule—the terrible food shortages, the brutal despotism, and the way in which French citizens were pitted against one another. And for all its dramatic excitement thrillingly conveyed, there is also a tenderly poignant love story, as feelings burgeon between Lili and her French handler, Henri Marnier, a doctor suffering from heartbreak as well. The author doesn’t cover any fresh literary territory—the novel fits neatly into a well-worn genre and flirts with the predictably formulaic. Nonetheless, the story is both historically astute and moving as well as briskly paced with a surfeit of intrigue.