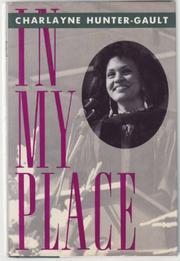 From the national correspondent for PBS's MacNeil-Lehrer Newshour: a moving memoir of her youth in the Deep South and her role in desegregating the Univ. of Georgia. The eldest daughter of an army chaplain, Hunter-Gault was born in what she calls the ``first of many places that I would call `my place' ''—the small village of Due West, tucked away in a remote little corner of South Carolina. While her father served in Korea, Hunter-Gault and her mother moved first to Covington, Georgia, and then to Atlanta. In ``L.A.'' (lovely Atlanta), surrounded by her loving family and a close-knit black community, the author enjoyed a happy childhood participating in activities at church and at school, where her intellectual and leadership abilities soon were noticed by both faculty and peers. In high school, Hunter-Gault found herself studying the ``comic-strip character Brenda Starr as I might have studied a journalism textbook, had there been one.'' Determined to be a journalist, she applied to several colleges—all outside of Georgia, for ``to discourage the possibility that a black student would even think of applying to one of those white schools, the state provided money for black students'' to study out of state. Accepted at Michigan's Wayne State, the author was encouraged by local civil-rights leaders to apply, along with another classmate, to the Univ. of Georgia as well. Her application became a test of changing racial attitudes, as well as of the growing strength of the civil-rights movement in the South, and Gault became a national figure as she braved an onslaught of hostilities and harassment to become the first black woman to attend the university. A remarkably generous, fair-minded account of overcoming some of the biggest, and most intractable, obstacles ever deployed by southern racists. (Photographs—not seen.)