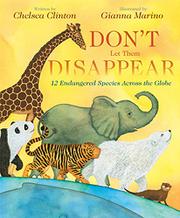 An appeal to share concern for 12 familiar but threatened, endangered, or critically endangered animal species.

The subjects of Marino’s intimate, close-up portraits—fairly naturalistically rendered, though most are also smiling, glancing up at viewers through human eyes, and posed at rest with a cute youngling on lap or flank—steal the show. Still, Clinton’s accompanying tally of facts about each one’s habitat and daily routines, to which the title serves as an ongoing refrain, adds refreshingly unsentimental notes: “A single giraffe kick can kill a lion!”; “[S]hivers of whale sharks can sense a drop of blood if it’s in the water nearby, though they eat mainly plankton.” Along with tucking in collective nouns for each animal (some not likely to be found in major, or any, dictionaries: an “embarrassment” of giant pandas?), the author systematically cites geographical range, endangered status, and assumed reasons for that status, such as pollution, poaching, or environmental change. She also explains the specific meaning of “endangered” and some of its causes before closing with a set of doable activities (all uncontroversial aside from the suggestion to support and visit zoos) and a list of international animal days to celebrate.

A winning heads up for younger readers just becoming aware of the wider natural world.