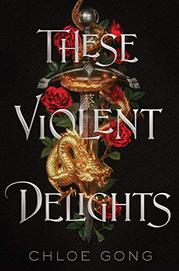 A monster spreads madness through the streets of Shanghai.

It is the autumn of 1926, and Shanghai is poised at the brink of transformation. Foreign powers have carved out portions of the city for themselves; what remains is divided between two feuding gangs, the Chinese Scarlet Gang and the Russian White Flowers. Eighteen-year-old Juliette Cai has returned home from New York City, wreathed in a reputation for ruthlessness and ready to step into her role as heir to the Scarlet Gang. Four years ago, a betrayal by the White Flowers heir, Roma Montagov, a young man of 19, led to the deaths of countless Scarlets, and Juliette is determined to avenge her gang. But when a lethal contagion strikes the city, targeting Scarlets and White Flowers alike, Juliette and Roma grudgingly agree to cooperate on an investigation in order to save their city. The slow-burning romance in this book takes a back seat to the gripping mystery grounded in immersive historical detail. Allusions to Romeo and Juliet are evident in names and specific scenes, but familiar themes of family, loyalty, and identity bear new significance in Gong’s inventive adaptation. Language is a tool wielded deftly by the multilingual characters, who switch easily among English, French, Shanghainese, Russian, and more, with Mandarin as the primary dialect for Chinese phrases. A strong supporting cast that includes a trans girl completes this striking debut.

A must-read with a conclusion that will leave readers craving more.