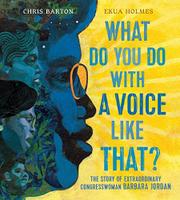 WHAT DO YOU DO WITH A VOICE LIKE THAT?

Jordan grew up in Houston, Texas, and “stood out” because of “that voice of hers. / That big, bold, booming, crisp, clear, confident voice. It caused folks to sit right up, stand up straight, and take notice.” As a young person, Jordan used it for poetry, speeches, and oratory contests. When a lawyer came to speak at her school, Jordan was inspired and thought she could use her voice as a lawyer. College and law school were challenging, but being a lawyer was boring. She got involved in politics. When she filled in for an absent speaker one night, she so inspired the audience that she decided that was how she should use her voice. She worked in the Senate and then in Congress, where she became famous for using her voice to speak up against President Nixon and for the Constitution. When illness called her back home, she taught, and her former students “still move among us, striving to do work that would have made her proud.” Striking mixed-media illustrations capture the relationships between people and the influence of place. Barton’s narration is colloquial, appropriately relying on rhetorical devices such as repetition and onomatopoeia to tell his tale.

A moving portrait of a true patriot who found ways to use her gift to work for change.