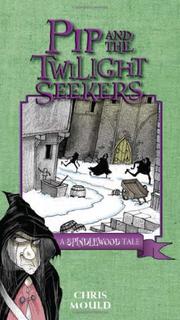 PIP AND THE TWILIGHT SEEKERS

From the A Spindlewood Tale series, volume 2

There are murky goings-on in Hangman’s Hollow and Spindlewood Forest as Pip, Frankie and Toad continue the tale begun in Pip and the Wood Witch Curse (2012).

Fleeing from city warden Jarvis, who has been in cahoots with the malevolent creatures of the surrounding forest who seek the city’s young people, the three heroes (one’s a heroine) brave the forest and rescue all the captured children. Readers are advised to either begin with the earlier title, or skip to the end, where the publisher has kindly included the first chapter of the series conclusion, which provides a back story. Those who don’t will find themselves dropped into the middle of the action here, and they will be understandably confused by the children’s situation and the doll that fortuitously moves the plot along. Gloomy ink drawings add atmosphere but don’t really help readers picture either the characters or the setting. The words often seem to have been chosen more for their feeling than their meaning, and there is no apparent care for how they will sound together. “The clawed hands and spindly claws of the forest creatures had retreated into the barky holes of the Spindlewood trees. The thick white of the forest floor was free of their cloven hoof marks and lumbering footprints.”

Children who read this wretched stuff may grow up to write like this—don’t let it happen.