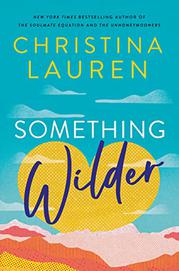 Former sweethearts team up to find potential treasure in the Utah wilderness—but the only thing more treacherous than the hunt might be their feelings for each other.

At the age of 19, Lily Wilder thought she had her future all figured out. She’d take over the ranch owned by her treasure-hunting father, the infamous Duke Wilder, and live there with her boyfriend, Leo Grady. But when Leo left unexpectedly and Duke sold the ranch, Lily’s dreams went up in smoke. Now it’s 10 years later, Duke is long dead, and all Lily has left of him is his journal full of maps and mysterious clues. She makes ends meet by using his maps to lead tourists on expeditions through the Utah desert. She dreams of buying back her childhood ranch, but she’s flat broke and miserable at her monotonous job. That is, until Leo shows up on a guys’ trip with his friends, ready to get on a horse and find some treasure. Seeing Leo is the last thing Lily wants, but when their routine trip goes shockingly wrong, Leo and Lily will have to work together if they want to figure out Duke’s last clue—and survive. Fans of Lauren, the writing duo known for their delightful rom-coms, may be surprised by this shift into the world of adventure romance. It should be a pleasant surprise, though, given that the story is fast-paced, exciting, and still full of that classic Lauren swoon (in between the danger, occasional violence, and plot twists). Lily and Leo’s romance is plenty steamy (there’s a scene where they’re forced to share a sleeping bag), but the real star is the landscape, which is described in sweltering, dusty detail.