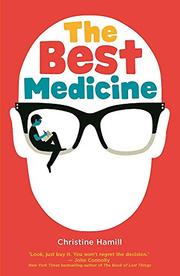 This Irish import’s 12-year-old narrator laughs to keep from crying.

Aspiring to become a professional comedian, Philip Wright enjoys entertaining his single mother and biggest fan, Kathy, while daily attempting to capture the attention of his art-class crush, “dark-haired goddess” Lucy Wells. When Kathy bursts into tears and locks herself in the bathroom after one of his jokes, Philip thinks he’s lost his touch. Prodded by her best friend, Kathy finally tells Philip that she has breast cancer that will require surgery, chemo, and radiation. Philip is initially enraged at how much this news will affect his world, never mind the impossibility of saying “breast” to his friends and teachers. When he finally faces the reality that he could lose his mom, Philip starts behaving like she matters. This novel has a rather slow beginning, with humor that feels too calculated to succeed, including an extended lisping riff, making fun of his Spanish best friend’s name (Angel, which Philip shortens to “Ang”), and the occasional reference to poo. The author also fails to explain how this family suffers no economic hardships while its only breadwinner cannot work. Nevertheless, middle-grade readers will identify with Philip’s conflicts with his best friend and his antics to win Lucy’s affections. Ang aside, the primary characters all appear to be Irish; absence of racial cues indicates that the default is white.

A cancer story that struggles to evoke either laughter or tears