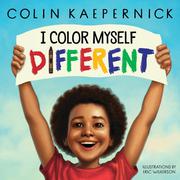 I COLOR MYSELF DIFFERENT

A debut picture book from the NFL quarterback who took a knee during the national anthem.

Kaepernick speaks directly to children about growing up Black in a White family. The story focuses on one incident: When he shares a drawing of his adoptive family with his class, other students ask why he’s the only brown-skinned one. But with reassurance from his mother, young Colin realizes he should take pride in his identity. Although he says, “I don’t know too many kids who look like me,” the bland, somewhat idealized illustrations show a classroom with children with a variety of skin tones, and the teacher is Black. The story includes a rather simplistic explanation of what it means to be adopted: “Ever since Mom wrapped me in that warm hug, I knew having brown skin and being adopted made me special.” Kaepernick adds, “I have brown eyes, a brown nose, and brown hands...just like the people who inspire, create, lead, and change the world.” The accompanying illustration depicts nine African American historical figures, including athletes famous for taking political stands: Tommie Smith and John Carlos, who raised their fists at the 1968 Olympics, and Muhammad Ali, as well as Huey Newton, Toni Morrison, Angela Davis, Audre Lorde, Ida B. Wells-Barnett, and Malcolm X. The historical roles of these individuals are explained in a brief addendum. (This book was reviewed digitally.)

Despite the name recognition of the author and relevance of the story, sweet yet inconsequential.