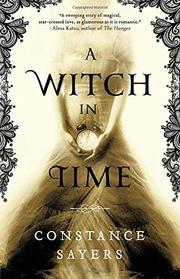 A WITCH IN TIME

In this, her debut novel, Sayers cleverly twists the loves-lost-through-time motif. Helen and Luke are not star-crossed, or rather curse-crossed, lovers from the 19th century, doomed to an eternity of thwarted passion. Instead, Sayers binds them together in a complicated codependent triangle: Helen is certainly replaying a thwarted love affair from more than a century ago, but she did not love Luke then. It all begins in 1895, when Juliet LaCompte, a beautiful 16-year-old French farm girl, falls in love with her summer neighbor, Auguste Marchant. Marchant is a Parisian artist who adores painting Juliet, and as the summer progresses, their desires for each other grow. But Marchant is very much married with a heavily pregnant wife, and Juliet is betrothed to a boy whose farm abuts her father’s. Even worse, Juliet’s mother, a skilled herbalist and sometime witch, finds out about their affair. Enraged that Juliet has besmirched the family’s honor and terrified for reasons Juliet cannot understand, her mother casts a spell cursing Marchant. But the spell is sloppily made, and it not only catches Juliet in its web, but also saddles her with a demon administrator: Lucian Varnier (aka Luke), who begins to fall in love with her, too. Sayers builds tension between present-day Luke and Helen by plunging Helen into a dream world, where she relives her time as a 1930s Hollywood starlet and 1970s rock musician, and each incarnation of Juliet becomes more attached to Luke. Moreover, her own powers as a witch have grown, so perhaps this will be the lifetime in which she breaks the curse. But her own feelings for Luke may get in the way.

A smart, engrossing debut from a writer to watch.