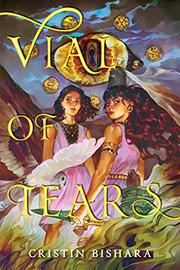 A magical coin strands sisters in a Phoenician underworld.

Sam and Rima receive a family heirloom from their great-grandfather who lives in their mother’s hometown in Lebanon—a clay jug with ancient coins in it. The sisters, who live in poverty with their mother (their White father is dead), wonder if this could be the solution to their financial woes. But one coin is frighteningly cold, and when Rima holds it, she summons a mysterious man and a windstorm that sweeps the girls from Michigan to a magical underworld where monsters and gods roam freely. The man—Eshmun, half god and half mortal—furiously wants his precious coin back. Sam gets her bearings in this world that is part historical Lebanon and part mythological, as she learns Eshmun’s role in a prophecy that may affect her and her sister as well. Throughout, Sam keeps her focus firmly on rescuing her sister, whose life hangs in the balance after being attacked by a beast, and returning home. Themes of destiny and death build up to an ending that’s just bittersweet enough. In the author’s note, Bishara, who shares her protagonists’ heritage, details her historical research and the family stories and photographs that inspired her. She generously shares recipes passed down through her family—an addition most appreciated, as the mouthwatering food descriptions are a crown jewel among the vividly painted settings, clothing, and people.

A heroic tale that feels both classic and fresh.