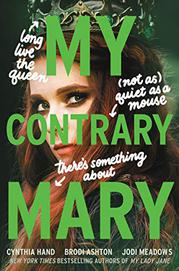 From the Lady Janies series

Following the success of their Lady Janies books, the trio of Hand, Ashton, and Meadows enter the world of early modern shape-shifters.

It’s 1560 Paris, the royal court of King Henry and his queen, Catherine de Medici (described by the modern authorial narrators, who use the royal we, as “a playful sort of evil”). Seventeen-year-old Mary, Queen of Scots, has lived there for 12 years, is betrothed to Francis, the French dauphin; is supervised by her powerful French uncles; and is attended by four devoted ladies-in-waiting, all also named Mary. But the religious wars in this version of history aren’t Protestant versus Catholic—they’re between Verities, humans who cannot shape shift, and Eðians, who can. In Scotland, John Knox is publishing pamphlets denouncing Verities and casting doubts on Mary’s fitness to rule while in France, King Henry threatens to persecute all Eðians. Francis knows his beloved can change into a mouse—but so does his mother—and when King Henry dies in a jousting “accident,” Catherine threatens the new queen with a mousetrap. Meanwhile, Ari, daughter of the prophet Nostradamus, has visions that strongly resemble blockbuster movies, and Francis and Mary satisfy the too-curious court on their wedding night by enthusiastically jumping up and down on their bed. Three narrators seamlessly tell the tale, which includes a gentle queer romance. Everybody’s White.