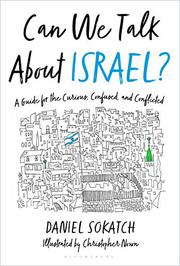 CAN WE TALK ABOUT ISRAEL?

A Guide for the Curious, Confused, and Conflicted

Acknowledging the passionate feelings surrounding the conflict on both sides, Sokatch, who runs the New Israel Fund, starts from the fair-minded position that Israelis and Palestinians are both right and both wrong, “two peoples, both with legitimate connections and claims to the land, who have been victimized by the outside world, each other, and themselves.” In a two-part narrative enhanced by Noxon’s illustrations, Sokatch first delves into the biblical history of the destruction of the Second Temple and dispersion of the Jews in 70 C.E. and the development of the two main Jewish cultures, Sephardic and Ashkenazi. The author moves on to Zionism and its various facets, with a sidebar exploring the question, “Is Zionism justifiable?” He then examines the existence of a people already on the ground when European Zionists arrived, raising the question of who has the more ancient legitimacy. (The likely truth, he writes, is that both peoples probably descend from the same stock.) With the rise of Jewish nationalism in the late 19th century, Palestinian Arab nationalists began to define themselves in direct opposition to the Zionists, and Jewish-Arab violence predictably increased. The author moves steadily from independence and the displacement of the Palestinians through the seemingly endless series of depressing, tumultuous conflicts that have plagued the region ever since. In the second part of the book, Sokatch addresses thorny issues that “make people crazy” about the conflict, including discrepancies between actual territory versus what the maps denote; the fraught history of U.S.–Israel relations; the effects of the Palestinian Boycott, Divestment and Sanctions movement; and the increase in power of Christian evangelicals. The author closes with a “Lexicon of the Conflict,” a highly useful tool offering further context to the narrative and the issues at hand.

An optimistic, evenhanded instruction manual, with upbeat illustrations, for anyone trying to understand the conflict.