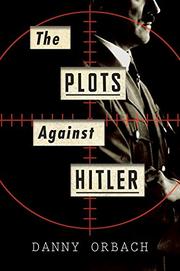 THE PLOTS AGAINST HITLER

A robust history of the German conspiracy against Nazism.

Orbach (History and East Asian Studies/Hebrew Univ. of Jerusalem) combines intellectual inquiry with thriller dynamics, explaining that “resistance to Hitler…is a field in which historical arguments are not purely academic but wrought through with passions.” The author acknowledges both the admirable aims and ultimate shortcomings of the conspirators, arguing that their story, culminating in Operation Valkyrie in 1944, is deceptively complex, while the plotters’ moral standings remain subject to competing interpretations. Today, he notes, many doubt “not only the moral integrity of the conspirators and their motives but their military skill as well.” Orbach counterbalances this by examining the connections between principal figures as the Nazis took hold of German society. Initially, defiance developed among conservative iconoclasts from the military and the nobility. The author uses organizational theory to explore how resistance to totalitarianism moved from such secretive “cliques” to broader networks, potent but more vulnerable. Of these early groups, “most…were never involved in opposition to the Nazi regime, but a tiny portion went through a process of revolutionary mutation in the opening months of 1938.” A planned coup nearly occurred that year, during Hitler’s aggression against Czechoslovakia, but it fizzled out following appeasement. As one plotter noted, “never, since 1933, was there such a good chance to free Germany and the world.” Amazingly, a disgruntled lone wolf nearly killed Hitler the following year, an event that stands in ironic contrast to the increasingly labyrinthine networks. Orbach tracks the conspiracy’s rise and fall over several years; some participants were motivated by spiraling defeats on the eastern front, others through witnessing genocidal acts. The charismatic Claus von Stauffenberg linked the military, bureaucratic, and civilian cliques into a “wheel conspiracy”; unfortunately, its efficiency permitted the Nazis to punish most plotters following his failed bombing of Hitler’s hideaway. Orbach is thoughtful and careful in portraying a rebellion against evil that ended “honorably, perhaps, but in utter failure.”

A dense but gripping look at a historical counternarrative that remains relevant and disturbing.