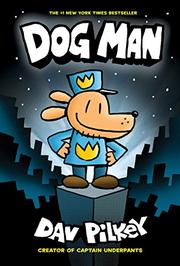 From the Dog Man series, volume 1

What do you get from sewing the head of a smart dog onto the body of a tough police officer? A new superhero from the incorrigible creator of Captain Underpants.

Finding a stack of old Dog Mancomics that got them in trouble back in first grade, George and Harold decide to craft a set of new(ish) adventures with (more or less) improved art and spelling. These begin with an origin tale (“A Hero Is Unleashed”), go on to a fiendish attempt to replace the chief of police with a “Robo Chief” and then a temporarily successful scheme to make everyone stupid by erasing all the words from every book (“Book ’Em, Dog Man”), and finish off with a sort of attempted alien invasion evocatively titled “Weenie Wars: The Franks Awaken.” In each, Dog Man squares off against baddies (including superinventor/archnemesis Petey the cat) and saves the day with a clever notion. With occasional pauses for Flip-O-Rama featurettes, the tales are all framed in brightly colored sequential panels with hand-lettered dialogue (“How do you feel, old friend?” “Ruff!”) and narrative. The figures are studiously diverse, with police officers of both genders on view and George, the chief, and several other members of the supporting cast colored in various shades of brown. Pilkey closes as customary with drawing exercises, plus a promise that the canine crusader will be further unleashed in a sequel.