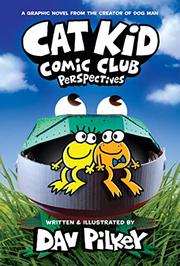 Li’l Petey and the young frogs of the Cat Kid Comic Club return for a second session that intersperses classroom and family drama with the froglets’ own comics.

This week’s lesson is perspective, both the graphical kind and the broad concept. The latter is perhaps best articulated by the froglets’ dad, Flippy, as he adjudicates Melvin and Naomi’s sibling bickering: “PERSPECTIVE isn’t just about DRAWING!!!…It’s about seeing the world from someone ELSE’S point of view!!!” Indeed, lessons in perspective abound: Curly and Gilbert’s Time Wasters comic reveals the Great Chicago Fire to have been a crashing bore…to time-traveling frog-kids who spent it playing video games; Poppy’s Skelopup gently shows how a dead dog and a dead girl, both grieving the losses of their former companions, find comfort over time through sharing their feelings with one another; and Summer and Starla’s Shodo Gardens readjusts assumptions with a series of haiku paired with photographs. Melvin and Naomi’s journey to détente, which forms the volume’s narrative throughline, includes an examination of unearned male privilege. Sharing coloring duties with Garibaldi, Pilkey deftly applies his trademark sly mix of revelation and in-your-face zaniness in busy, froglet-filled panels that take advantage of the anthology format to showcase comics’ versatility.

Mind-bending, in the best possible way.