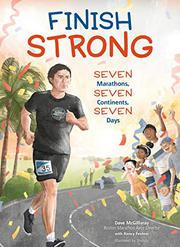 by Dave McGillivray with Nancy Feehrer ; illustrated by Shululu

A veteran marathoner recalls an around-the-world race in 2018.

Still hoofing along after literally Running Across America (2019), McGillivray offers another autobiographical outing. This one sends him over “26.2 cold, crunchy miles” in Antarctica, “26.2 miles of out-and-back loops along the Persian Gulf,” and like distances on five other continents in a single week as a participant in the annual World Marathon Challenge. Though his terse accounts of places, faces, and races along the way are more snapshots than a connected narrative, they add up to some vivid memories, and he builds climactic suspense by describing how he powers through an increasingly painful injury to finish the final leg. Every experience, though, leads to an explicit inspirational slogan: “Set goals, not limits”; “Your greatest accomplishment is your next one”; “Never underestimate your own abilities”; “Finish strong…or weak. Just finish!” The lessons continue as he goes on to describe how a later diagnosis of heart disease (“Just because you’re fit, doesn’t mean you’re healthy”) led to surgery and—because a “comeback is always stronger than the setback”—a run in the Boston Marathon six months later. If that last bit seems aimed more at adults than kids, he goes for a more general audience with a final page of alternative “marathons,” like “Read! 26 Books” and “Reach Out! 26 Acts of Big-Hearted Kindness” modeled on a St. Louis initiative. Staid illustrations place the White author front and center in stylized foreign settings, occasionally with racially diverse groups of onlookers or fellow runners in the background.

The motivational agenda definitely outpaces the storytelling, but readers will be swept along to the finish line.