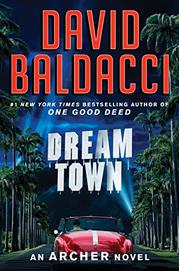 An old-fashioned gumshoe yarn about Hollywood dreams and dead bodies.

Private investigator Aloysius Archer celebrates New Year’s Eve 1952 in LA with his gorgeous lady friend and aspiring actress Liberty Callahan. Screenwriter Eleanor Lamb shows up and offers to hire him because “someone might be trying to kill me.” “I’m fifty a day plus expenses,” he replies, but money’s no obstacle. Later, he sneaks into Lamb’s house and stumbles upon a body, then gets knocked out by an unseen assailant. Archer takes plenty of physical abuse in the story, but at least he doesn’t get a bullet between the eyes like the guy he trips over. A 30-year-old World War II combat veteran, Archer is a righteous and brave hero. Luck and grit keep him alive in both Vegas and the City of Angels, which is rife with gangsters and crooked cops. Not rich at all, his one luxury is the blood-red 1939 Delahaye he likes to drive with the top down. He’d bought it with his gambling winnings in Reno, and only a bullet hole in the windscreen post mars its perfection. Liberty loves Archer, but will she put up with the daily danger of losing him? Why doesn’t he get a safe job, maybe playing one of LA’s finest on the hit TV show Dragnet? Instead, he’s a tough and principled idealist who wants to make the world a better place. Either that or he’s simply a “pavement-pounding PI on a slow dance to maybe nowhere.” And if some goon doesn’t do him in sooner, his Lucky Strikes will probably do him in later. Baldacci paints a vivid picture of the not-so-distant era when everybody smoked, Joe McCarthy hunted commies, and Marilyn Monroe stirred men’s loins. The 1950s weren’t the fabled good old days, but they’re fodder for gritty crime stories of high ideals and lowlifes, of longing and disappointment, and all the trouble a PI can handle.