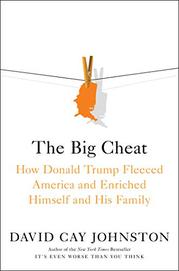 How Donald Trump Fleeced America and Enriched Himself and His Family

Johnston opens with a scenario of desperation: In the wake of the 2008 financial crisis, great numbers of low-income, poorly informed Americans longed for a savior who “would relieve their financial crisis.” What they got was a “master con artist” who would “cheat them out of what they had, all the while telling them that he was really their friend and helper.” Step 1: Destroy the notion of objective truth. Step 2: Send up a smokescreen of lies. Step 3: Loot the people’s treasury, self-dealing while leaving scraps for other financial predators. Johnston assembles a case that’s full of news and startling incidents. In one, a 29-year-old Trump assaults outgoing New York Mayor Abe Beame to strong-arm a sweetheart deal; though police officers escorted him from Beame’s office, he got what he demanded. The behavioral pattern with the most staying power is not violence, however, but cheating: overstating assets, engaging in phony accounting, not paying taxes. With the power of the presidency, Trump—who, Johnston reminds us, is the only president past or present at the center of a felony investigation—opened the nation’s coffers to his fellow grifters, engaging in “the kind of borrowing that made Trump infamous—money you borrow but never pay back in full and perhaps not at all.” Those fellow grifters are legion, but at the top of the list are daughter Ivanka and son-in-law Jared Kushner as well as former transportation secretary Elaine Chao, poster children “who illustrate the need for strict ethics training and for equally strict enforcement of laws against misusing public office.” Trump’s sole accomplishment, by Johnston’s account, was the failed coup of Jan. 6, 2021, because it “testifies to his incompetence” while shining a light on would-be dictators waiting in the wings.

True believers won’t be swayed, but those inclined to despise Trump and Trumpism will find ample reinforcement.