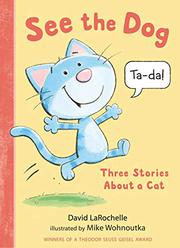 Three Stories About a Cat

A cat takes a sick dog’s place as the protagonist of three silly stories.

In the same vein as predecessor See the Cat (2020), LaRochelle and Wohnoutka’s latest collaboration plays out as a running argument between narrator and animal character. When the verso text reads “See the dog,” a blue cat appears on the recto. The cat declares via speech bubble that they’ve been asked to take the dog’s place because he is sick. At first, the cat revels in the make-believe—with a few slip-ups. But the narrator’s asks are met with resistance when the cat’s comfort zone is crossed. In Story Number One, the cat listens to the “bossy book” and digs—albeit using an excavator. The narrator abruptly interrupts the cat’s fun with a “See the dog STOP digging holes!” In Story Number Two, the cat begrudgingly jumps into the lake (which is really more of a pond) and immediately yells for help. Story Number Three puts the cat in charge of protecting a sheep from a wolf. The playful rebellion against the repetitive Dick-and-Jane pattern makes for nonstop, rip-roaring fun. Using around 130 words and their variants, the careful yet deliciously over-the-top writing keeps the text accessible yet engaging. Wohnoutka’s full-color cartoon illustrations hilariously accentuate the cat’s histrionics. While most illustrations appear solely on the recto, a few well-placed double-page spreads add some delightful surprises.

See this book fly off the shelves.