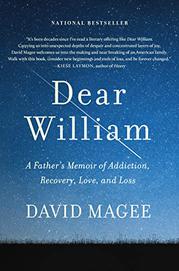 A Father's Memoir of Addiction, Recovery, Love, and Loss

A writer and former newspaper editor reflects on his family’s addiction issues following his son’s fatal drug overdose in this memoir.

The memoir opens in 2013, with author Magee witnessing his son William lying dead on his couch with a rolled up $20 bill still in his hand. William, who’d spent time in drug rehab, was eager to go to law school but unable to shake his addiction. During their final meeting before his death, William encouraged his father to write a book about their family’s struggles to help other families. Magee writes of being raised in a family that had its share of secrets: His parents covered up his adoption with a fake birth certificate, and his adoptive father was a closeted gay man. Magee also describes his own problems with substance abuse that began in his teens. As a father, he identified similar patterns of addiction in his offspring; his other son, Hudson, got into a life-threatening accident prompted by substance abuse. The memoir closes with the author working on building the William Magee Institute for Student Wellbeing at the University of Mississippi for students with alcohol and drug problems. Magee’s prose is crisp and precise, showcasing an effortless descriptive style: “The first day of February, I peek through the blinds. It’s sunny out, and flakes swirl in the air, although the sky is all blue. Everything else is white, alien, sparkling.” Despite journalistic leanings toward brevity, his writing is never sterile; this passage, describing his bond with his son, is subtly laced with evocative imagery and complex emotion: “He wanted to look out for me. Because I’m fragile. His boy-man face grows wavery as I blink back tears.” The text can be brutal at times, but overall, this is a carefully nuanced work that explores the dark realties of substance abuse. Indeed, despite his tragic loss, Magee’s tone is frequently positive: “Our children’s struggles have changed us. We’re more aware of the suffering of others and more motivated to help them.”

Essential, poignant, and insightful reading for anyone aiming to understand familial patterns of addiction.