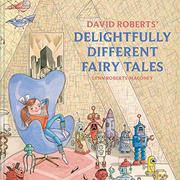 Originally published separately between 2001 and 2016, the stories are massaged in ways that tone down the violence of pre-Disney versions and show off the illustrator’s chops as a caricaturist. In “Cinderella” (2001), the scenes are filled with flamboyant art deco fashions and details; the fairy godmother creates a snazzy limo to take young Greta to the ball; and rosebud-lipped, pointy-nosed evil stepsisters Ermintrude and Elvira survive unmutilated. Similarly, in “Rapunzel” (2003), the title character escapes her mid-1970s flat to run off with (unblinded) pop musician Roger, and in “Sleeping Beauty” (2016), when 16-year-old science-fiction fan Annabel pricks her finger on the needle of a record player, she falls asleep for 1,000 years. The three female leads project airs of independence but really have no more agency here than in the originals. The all-White casts and conventional relationships of the first two stories do loosen a bit in “Sleeping Beauty,” as Annabel, who seems White, is watched over by an interracial pair of motherly aunts and awakened at long last (albeit with a touch, not a kiss) by Zoe, who has light-brown skin and long, black hair. Notes following each tale draw attention to the period details, and even the futuristic city at the end has a retro look. (This book was reviewed digitally with 10.5-by-21-inch double-page spreads viewed at 70 % of actual size.)

The tweaks deliver no real alterations, but the clothing and hairstyles may amuse.