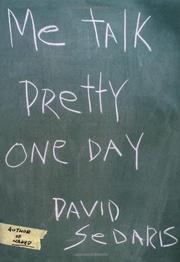 ME TALK PRETTY ONE DAY

The undisputed champion of the self-conscious and the self-deprecating returns with yet more autobiographical gems from his apparently inexhaustible cache (Naked, 1997, etc.).

Sedaris at first mines what may be the most idiosyncratic, if innocuous, childhood since the McCourt clan. Here is father Lou, who’s propositioned, via phone, by married family friend Mrs. Midland (“Oh, Lou. It just feels so good to . . . talk to someone who really . . . understands”). Only years later is it divulged that “Mrs. Midland” was impersonated by Lou’s 12-year-old daughter Amy. (Lou, to the prankster’s relief, always politely declined Mrs. Midland’s overtures.) Meanwhile, Mrs. Sedaris—soon after she’s put a beloved sick cat to sleep—is terrorized by bogus reports of a “miraculous new cure for feline leukemia,” all orchestrated by her bitter children. Brilliant evildoing in this family is not unique to the author. Sedaris (also an essayist on National Public Radio) approaches comic preeminence as he details his futile attempts, as an adult, to learn the French language. Having moved to Paris, he enrolls in French class and struggles endlessly with the logic in assigning inanimate objects a gender (“Why refer to Lady Flesh Wound or Good Sir Dishrag when these things could never live up to all that their sex implied?”). After months of this, Sedaris finds that the first French-spoken sentiment he’s fully understood has been directed to him by his sadistic teacher: “Every day spent with you is like having a cesarean section.” Among these misadventures, Sedaris catalogs his many bugaboos: the cigarette ban in New York restaurants (“I’m always searching the menu in hope that some courageous young chef has finally recognized tobacco as a vegetable”); the appending of company Web addresses to television commercials (“Who really wants to know more about Procter & Gamble?”); and a scatological dilemma that would likely remain taboo in most households.