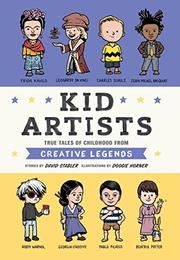 From the Kid Legends series, volume 3

For budding artists, here’s a heartening reminder that 17 unconventional greats—not to mention all the rest—started out as children too.

The pseudonymous Stabler (Robert Schnakenberg in real life) adopts a liberal admissions policy for his latest gathering of anecdotal profiles (Kid Presidents, 2014, etc.). In a chapter on the influence of nature and wildlife on early artistic visions, Leonardo da Vinci and the young Vincent van Gogh rub shoulders with Beatrix Potter and Emily Carr; in another focusing on overcoming shyness or other personal, social, or economic obstacles, Jackson Pollock hangs out with Charles Schulz, Yoko Ono, and Jean-Michel Basquiat. In a third chapter that highlights the importance of a supportive parent, teacher, or other cheerleader, fathers do for prodigious young Pablo Picasso and polio-stricken Frida Kahlo, his mother for Andy Warhol, art instructors for Jacob Lawrence and Keith Haring. The author owns an easy, readable style, and though he leaves out quite a lot—Diego Rivera goes unmentioned in the Kahlo entry, nor do van Gogh’s suicide, Basquiat’s heroin addiction, or anyone’s sexual orientation come up—he’s chosen his subjects with an eye toward diversity of background, upbringing, and, eventually, style and media. Horner lightens the overall tone further with cartoon vignettes of caricatured but recognizable figures.

Noncanonical entries make this a natural companion or follow-up for Kathleen Krull’s essential Lives of the Artists, illustrated by Kathryn Hewitt (1995).