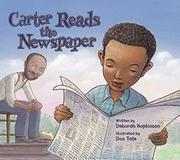 This biography of the “father of Black History,” Dr. Carter G. Woodson, highlights experiences that shaped his passion.

Carter was born after the Civil War, but his parents had been slaves, and he grew up hearing the stories of their lives. With six siblings, Carter experienced lean times as a boy. Carter’s father, who couldn’t read or write, had Carter read the newspaper aloud. As a teenager, Carter had to work to help his family. In the coal mines, he met Oliver Jones, a Civil War veteran who opened his small home to the other men as a reading room. There, Carter once again took on the role of reader, informing Oliver and his friends of what was in the paper—and then researching to tell them more. After three years in the mines, he moved home to continue his education, eventually earning a Ph.D. from Harvard, where a professor challenged him to prove that his people had a history. In 1926 he established Negro History Week, which later became Black History Month. Hopkinson skillfully shapes Carter’s childhood, family history, and formative experiences into a cohesive story. The soft curves and natural palette of Tate’s illustrations render potentially scary episodes manageable for young readers, and portraits of historical figures offer an opening to further discovery. The incorporation of newsprint into many page backgrounds artfully echoes the title, and the inclusion of notable figures from black history reinforces the theme (a key is in the backmatter).