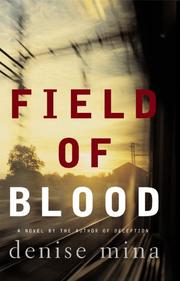 It’s 1981 when the murder of a three-year-old boy, based on the notorious James Bulger case, leads to another walk on Glasgow’s wild side.

Patricia Meehan is so shocked to find that one of the two boys arrested for the murder of little Brian Wilcox is her fiancé Sean Ogilvy’s cousin Callum that she blurts out the news to Heather Allen, an ambitious columnist at the Scottish Daily News, where Paddy works as a copyboy. Heather, who’s everything Paddy isn’t—thin, well-bred, college-educated—urges her to write a feature on the boy and his family and, when Paddy refuses, files the story herself. Now Paddy, already snubbed by her hard-drinking colleagues, gets a massive cold shoulder from her own family, convinced she’s sold them out to advance her career. Paddy’s only hope for what passes for redemption in Mina’s brutal cityscape is to join forces with raffish reporter Terry Hewitt—the one who calls her a fat lassie—in looking more closely into a case everyone in town has already closed with a bang. As if her own investigation weren’t dark enough, Mina (Deception, 2004, etc.) introduces a running counterpoint: the real-life case of Paddy’s namesake, a burglar convicted in 1969 of murder despite his pleas of innocence and released only after seven years in a solitary confinement little more stifling than the Scottish Daily News.

Mina is a ruthlessly accomplished surgeon of souls who can strip her living characters as bare as Patricia Cornwell does her corpses.