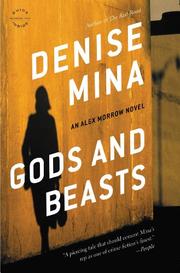 Who would shoot an inoffensive retiree in the middle of an otherwise routine robbery?

One minute, geology student Martin Pavel is queued up at the post office; the next, he’s lying on the floor at the command of a man with a mask, an AK-47 and a very short temper. Yet Martin is a lot luckier than Brendan Lyons, the retired bus driver who offered to help the gunman collect the loot and got thoroughly shot for his trouble. It seems clear that the robber recognized the old man, but even so, why would he feel the need to kill him? DS Alexandra Morrow would love to bear down hard on the case, but as usual, there are other problems. After pulling over dicey driver Hugh Boyle, DC Tamsin Leonard and DC George Wilder have found £200,000 concealed in his car; instead of turning it in, Wilder’s had the bright idea of splitting it between themselves; and the surprisingly resourceful Boyle has photographed them in possession of the loot. So, even though Alex gets a promising lead that links the gunman to the anonymous figure who menaced householder Anita Costello three years ago, Strathclyde’s finest is hardly enjoying its finest hour. Higher up in the social ranks (though equally far down the ethical scale), Labour MP Kenny Gallagher is battling rumors that he’s taken party volunteer Jill Bowman, 17, under more than his wing—rumors that are particularly hard to scotch since they’re true.

As Gallagher faces the ruin of his career, readers will wonder how Alex (The End of the Wasp Season, 2011, etc.) can possibly tie these cases together. Though the final surprise doesn’t have the snap of logical inevitability, it’s depressingly realistic.