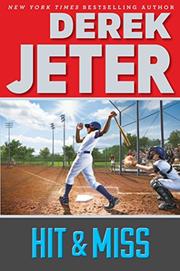 by Derek Jeter with Paul Mantell

Fourth-grader “Derek” works his way through a batting slump, pulls an outsider into his circle of friends, and atones for being a bully in this semiautobiographical sequel co-authored by the recently retired Yankees captain.

The actual story is preceded by a good-behavior “contract” between the future star and his invariably strict-but-fair parents, a list of 10 “Life Lessons,” plus an introductory note explaining that this episode—the second in a planned 10—will be based on the theme “Think Before You Act.” It is entirely a vehicle for platitudes and behavior modeling. Notwithstanding the gibes of his friends, Derek holds out a welcoming hand to Dave, a seemingly standoffish new class- and teammate who turns out to be a lonely rich kid with absentee parents. Meanwhile, Derek’s delight at the opening of Little League season turns to determination as he goes hitless through the first three games. Then he angrily gets into the face of a kindergartener who is bullying his little sister, Sharlee, and is called into the principal’s office with his parents for a disciplinary conference. Wheeling along past billboard-sized doses of both life and baseball coaching, plus repeated reminders to “stay positive,” every plotline ultimately coasts to a salutary resolution: Dave earns general acceptance through improved play on the field; Derek shows sincere remorse for his misdeed and formally apologizes to his victim (who later befriends Sharlee); and the base hits finally start coming as Derek leads his team to the championship game.

An altogether trite, values-driven star vehicle—worthy of purpose but aside from occasional game action, as dull as a rain delay.