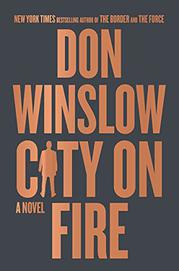 A blistering novel filled with anger and bite.

Danny Ryan is a dockworker in Providence, Rhode Island, who’s “faithful like a dog” to his wife, Terri, of the rival Murphy clan, and sometimes does some less-than-legal errands for his father-in-law, John. He wants more out of his life and wants to “not owe nobody nothing,” but nobody ever leaves Dogtown. One day at the beach, he sees “the goddess who came out of the sea” and who “has a voice like sex.” Terri's brother Liam Murphy accidentally-on-purpose touches the woman’s breast, which sets off a chain reaction of events in which bullets fly and f-bombs and their ilk swarm like cicadas on nearly every page. You know, you just don’t touch a made guy’s woman, and the goddess is going out with Paulie Moretti. The Providence press gleefully reports the other-side-of-the-tracks bloodletting among men who supplement their wages with hijacking trucks and boosting heroin. So Danny wants out with his wife and son, but—well, it’s complicated. Chances are they’ll have to live and die in Dogtown. And, oh yeah, Danny loathes his rich mother, who tries so hard to make amends for abandoning him. The characters are as vividly described as some of them are vile: One guy “never met a job he couldn’t lose.” John Murphy is “the king of an empire that died a long time ago. The light of a long-dead star.” At the ocean, Danny observes that the “whitecaps look like the beards of sad old men.” A Murphy declares, “That Ryan blood….It’s cursed.” But the Murphy blood isn’t exactly touched by angels either. And then there are the Morettis, all of them trapped in a cycle of crime and violence, just looking for an excuse to go to war. One difference between Danny and some of the others is he’s never killed anybody. Yet. Meanwhile, a planned heist might just solve some financial problems for whoever survives all the betrayals.

Plenty of pain for the characters, plenty of thrills for the reader.