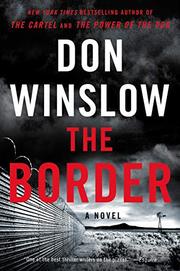 From the Power of the Dog series, volume 3

Art Keller is a man with enemies. Wherever he goes, he leaves a pile of bodies behind him—narcotraficantes, cops on the take, bad guys of every description. Sometimes he plies his trade in Guatemala, sometimes El Paso, sometimes D.C., wherever the white lines take him. But now—well, he’s in trouble, at war “against his own DEA, the U.S. Senate, the Mexican drug cartels, even the president of the United States.” Someone is irritated enough at him, in fact, that a sniper has been dispatched to shoot up the Vietnam Veterans Memorial, where Keller is paying his respects. That’s guaranteed to tick Keller off, and so he goes into battle in a changed scenario: The hit men and Zetas of old are shadows of their former selves while the new generation struts around, as one does, in “a black Saint Laurent jacket that has to go for at least three grand.“ When Keller notices such stuff, it means you’re on his radar, which is not where you want to be. He recruits a few like-minded warriors, and off they go. Well, some of them, anyway: “If you want to be in the real war, fly back to Seattle, pack your things, and be here ready to work first thing Monday morning,” he growls to a kid who wants to go zipping around in helicopters with a knife between his teeth instead of manning a desk. The bad guys begin to drop off in a tale that’s part Tom Clancy, part didactic and ever-so-gritty how-it’s-done asides (“The Americans teamed with the Mexican marines on raids that were basically executions”) and part old-school shoot’em-up: “Keller takes the policeman’s sidearm—a 9mm Glock—and moves through the trees toward the shooter.”

Jack Ryan’s got nothing on Winslow's guy. An action-filled, sometimes even instructive look at the world of the narcos and their discontents.