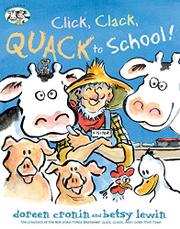 “On Monday, Duck brought a letter to Farmer Brown. Some of it was written in crayon.”

The crayoned interpolation to the typewritten invitation to visit Dinkelmeyer Elementary School reads: “Bring the animals, too!” Farmer Brown tells the cows to get ready, setting off much stomping and mooing; killjoy Farmer Brown then tells them that “school is very quiet,” which lessens their excitement. Similarly, after getting the chickens excited, Farmer Brown tells them that “school is very serious,” and he tells the pigs that “school is very calm.” When he finds Duck, the fowl is meditating on a yoga pillow; he is told “not to be so Duck-y.” It’s a solemn bunch that pulls up at school—but when the schoolyard fills with boisterous youngsters, the animals loosen right up, mooing and stomping, clucking and clapping, oinking and hollering. Duck, of course is “just Duck-y,” installing himself at the principal’s desk. This latest entry in the venerable series offers a few chuckles and opportunities for children to moo, cluck, and oink, but the delicious overturning of expectations earlier entries have provided here feels just as flat as the animals’ emotions. Readers new to the series won’t know why Duck shouldn’t be “Duck-y,” making that extended joke one for insiders only. Farmer Brown is white; the children, seen only on one double-page spread, are diverse, and one of them uses a wheelchair.