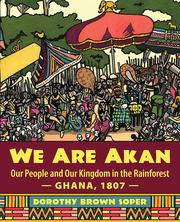 Our People And Our Kingdom In The Rainforest — Ghana, 1807 —

A trip to the capital helps three boys from the Asante Kingdom learn more about themselves, their culture, and the wider world in this debut historical novel for middle graders.

In 1807, the Asante Kingdom (roughly corresponding to modern-day Ghana) is the most powerful nation in West Africa. The dominant ethnic group is the Akan, who enslave prisoners of war, called nnonko. Two Akan boys—Kwaku, 11, and Kwame, 12—and Baako, 13, an enslaved Gurunsi boy, live in the town of Tanoso, where Kwame’s father is chief. It’s time to learn adult skills: throwing a spear, trading in the marketplace, figuring out how taxes work, repairing a roof, thinking and speaking with care, and more. In their matrilineal society, Kwaku—the chief’s elder sister’s son—could become chief if he proves his worth, and Baako’s hard work could earn him his freedom through being adopted. As part of their leadership education, the boys are invited to make the eight-day trip to the Asante capital, Kumasi, for an important festival. It’s an exciting crossroads where the boys see many new sights, including horses and the written word. When Kwame and Baako are kidnapped to be sold into slavery, they face a frightening ordeal that confronts them with their complicated world. With her novel, Soper makes the rich Akan culture come alive through the boys’ need for an education, a natural way to present captivating details. The morality of slavery is considered from several angles. For example, what happens to enslaved people who are sold to Whites is a question dismissed as unknowable. But the book is slowed down by much repetition, such as reiterating the fact that ceremonial stools are painted black to indicate the owners’ deaths. Cloutier provides numerous, well-composed monochrome illustrations that give useful context for unfamiliar elements. Helpful resources are included.

An immersive and thoughtful historical novel that explores West Africa in 1807.