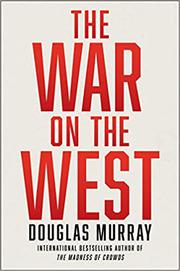 THE WAR ON THE WEST

“There is an assault going on against everything to do with the Western world—its past, present, and future.” So writes Spectator associate editor Murray, whose previous books have sounded warnings against the presumed dangers of Islam and of non-Western immigration to the West. As the author argues, Westerners are supposed to take in refugees from Africa, Asia, and Latin America while being “expected to abolish themselves.” Murray soon arrives at a crux: “Historically the citizens of Europe and their offspring societies in the Americas and Australasia have been white,” he writes, while the present is bringing all sorts of people who aren’t White into the social contract. The author also takes on the well-worn subject of campus “wokeness,” a topic of considerable discussion by professors who question whether things have gone a bit too far; indeed, the campus is the locus for much of the anti-Western sentiment that Murray condemns. The author’s arguments against reparations for past damages inflicted by institutionalized slavery are particularly glib. “It comes down to people who look like the people to whom a wrong was done in history receiving money from people who look like the people who may have done the wrong,” he writes. “It is hard to imagine anything more likely to rip apart a society than attempting a wealth transfer based on this principle.” Murray does attempt to negotiate some divides reasonably, arguing against “exclusionary lines” and for Henry Louis Gates Jr.’s call for a more vigorous and welcoming civil culture. Too often, however, the author falters, as when he derides Gen. Mark Milley for saying, “I want to understand white rage. And I’m white”—perhaps forgetting the climacteric White rage that Milley monitored on January 6, 2021.

A scattershot exercise in preaching to the choir.