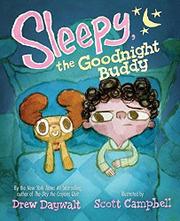 The opening text cuts to the chase and declares, “Roderick hated going to bed.” Campbell’s accompanying watercolor illustration shows a pajama-clad boy with his back to readers (and parents). He looks away from his toys and casts a defiant look over his shoulder at his parents, whose bodies are only partially visible on the page as they loom over him. Humorous text and art proceed to share his various stalling techniques, including his intentional provocation of a litany of “reasons why he couldn’t have a pony.” Roderick is resistant when his parents introduce him to Sleepy, “a goodnight buddy to help him sleep.” The stuffed animal looks like a cross between a bear and a moose with enormous eyes that stare at Roderick until he finally tosses him in his closet. He’s shocked and exclaims, “You’re alive!” when Sleepy protests. Sleepy then turns the tables on Roderick and wears him out with a series of demands and protestations against going to sleep. Lo and behold, an exhausted Roderick finally collapses in his bed, but not before Sleepy’s antics and Roderick’s responses to them can delight readers—though some may object to a cheap attempt for laughs when Roderick reads aloud a book entitled The Witch’s Booty, about “a witch with a very big butt,” and a rapid-fire barrage of variants on “freak” in the dialogue. Roderick is a pink-skinned, big-eyed boy with a mop of dark curls.