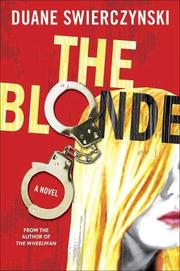 A hapless reporter runs afoul of a dangerous blonde with a story so bizarre that it just might be true.

While waiting in the Philly airport, journalist Jack Eisley strikes up a conversation with a flirtatious blonde who abruptly informs him that she has poisoned his drink; he’ll be dead in 12 hours. At first he laughs it off, but the stomach pains predicted by the woman who calls herself Kelly White give him second thoughts. More complex and implausible explanations follow. Kelly is a guinea pig who will also die if she fails to stay within ten feet of another human being. Meanwhile, a brutal operative named Mike Kowalski, who works CI-6—which may be a secret government agency or a crime syndicate—is searching for the body of a recently deceased professor. His assignment is to bring back the corpse’s head for testing. The story then leaps from one quick chapter to another from a different perspective. While Jack is getting into various taxis, Kelly picks up another guy, named Ed, at the airport. But when she spots Jack returning, she dumps Ed for Jack. Kowalski watches all this, then follows Ed home and finds him inexplicably dead and covered with blood. When Kowalski’s handler asks for Ed’s head, more complications ensue until the blonde and the hit man finally intersect.