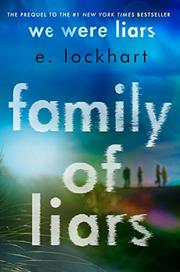 This prequel to We Were Liars (2014) takes place in 1987 as 17-year-old Carrie Sinclair faces her first summer at the family’s Massachusetts vacation property without her youngest sister, Rosemary.

Ten-year-old Rosemary drowned the previous summer while swimming alone. Carrie’s parents and remaining sisters, 16-year-old Penny and 14-year-old Bess, endure the loss with characteristic Sinclair stoicism, but Carrie finds it difficult to repress her sorrow, even with the aid of codeine pills to numb her pain. When Rosemary’s ghost appears to her, she is bewildered by the specter but accepts her intermittent appearances and comfortably mundane requests. Even more unexpected are the arrivals on Beechwood Island of George, Major, and Pfeff, friends of Carrie’s cousin Yardley. The boys’ presence, a deviation from the Sinclair family’s usual routine, sets into motion an unforeseen chain of events that ultimately entangles the three oldest Sinclair sisters. Lockhart’s stark, evocative prose captures the emotions of a grieving teenage girl paralyzed by the weight of her parents’ expectations and plagued by a perpetual sense of inadequacy. The novel is framed as a story that present-day Carrie tells the ghost of her deceased son, Johnny, who asks Carrie to reveal “the absolute worst thing you ever did, back then.” Her response is a haunting confession about family allegiances; the arbitrary rules of powerful, moneyed White families; and the strength required to bear witness to terrible truths.